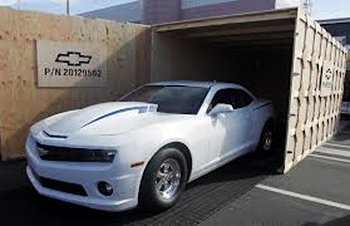 For racers and collectors alike, the most famous of those historic Bowtie-built missiles was the 1969 COPO 9560 ZL1 Camaro, of which only sixty-nine were assembled, aimed squarely at NHRA Stock and Super Stock classes, and for going head to head with Chevy’s cross-town Detroit rivals. Now, over four decades later, history has repeated itself and the Big Three dragstrip rivalry will be revisited, thanks to the building of sixty-nine 2012 COPO Camaros by Chevrolet Performance. Announced in the fall of 2011, it took little time for all these new-century COPOs to be spoken for by quarter-mile combatants across the continent. Using factory production bodies-in-white as a starting point, and powered by a choice of three different LS-based engines – one naturally aspirated 427 and two 327’s with differing twin-screw superchargers – the 2012 COPO Camaro was developed in close cooperation with the NHRA for legality in Stock Eliminator and/or Super Stock competition. Available from Chevrolet Performance as the ultimate “performance part”, P/N 20129562, this new generation COPO Camaro proudly carries on the winning tradition of COPOs from the ‘60’s. And, as announced in the fall of 2012, the legacy continues with Chevrolet Performance building sixty-nine COPO Camaros for 2013.

With history thus being re-made, we figured that automotive enthusiasts might look upon this current new crop of 21st century COPOs with the same reverence that we have for the original Sixties version, and might like to know how to go about building a COPO-style quarter-mile Camaro of their own.

This web site serves as a source and reference for those enthusiasts considering building a COPO-style Camaro, or adding select performance upgrades to their street Camaros, from the ready supply of parts, component kits, and expertise available for that purpose through this website.